Pharm/DUR Inc., a U.S firm with a nationwide auditing platform which reports inaccuracies in pharmacy transactions, thought they had identified their preferred buyer very early in the BCMS assisted sale process. However, after lengthy negotiations, due diligence, and the agreement of an S.P.A. they eventually felt the potential buyers didn’t provide an optimal match for them.

The firm was then taken back to market and subsequently agreed that the highly acquisitive parent company of a close competitor may provide the answer. Dallas-based ACS (Affiliated Computer Services Inc.), a major business process outsourcing firm had a strong history of successful acquisitions. ACS had fuelled its expansion by acquiring other businesses, growing to a current total revenue of $6.2 billion and staff of more than 74,000. In fact, BCMS Corporate had previously sold two companies to one of their acquisitions, Syan Holdings.

With ACS’s existing pharmacy audit and verification business, which it began five years ago, the acquisition strengthened the firm’s position in the marketplace. “This acquisition solidifies ACS’ leadership position in the pharmacy audit market, and will make the combined operation more competitive as we adopt Pharm/DUR’s auditing tools and leverage its nationwide distributed auditor network,” said Christopher T. Deelsynder, senior vice president and managing director of ACS Government Healthcare Solutions. “The veteran management team and talented employees of Pharm/DUR will continue to provide high quality service to its customers.”

Pharm/DUR’s shareholders were pleased with the outcome of the sale, which was precipitated by the previously discussed accepted offer, a number of meetings, and the review of a wide range of buyers.

Pharm/DUR’s shareholders were pleased with the outcome of the sale.

“The client-focused cultures at Pharm/DUR and ACS will ensure a smooth transition for all of our employees and clients,” said Anthony Spay, CEO of Pharm/DUR. “Also, Pharm/DUR’s clients will benefit from ACS’ diverse healthcare management offerings that can further reduce their operating costs.” 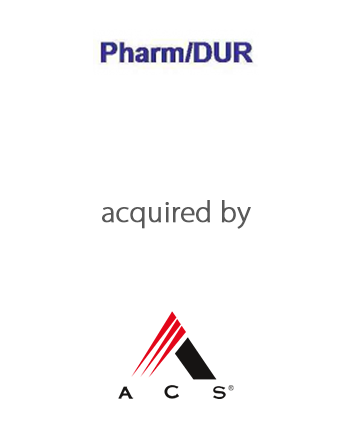